Spreading wellbeing via our events! 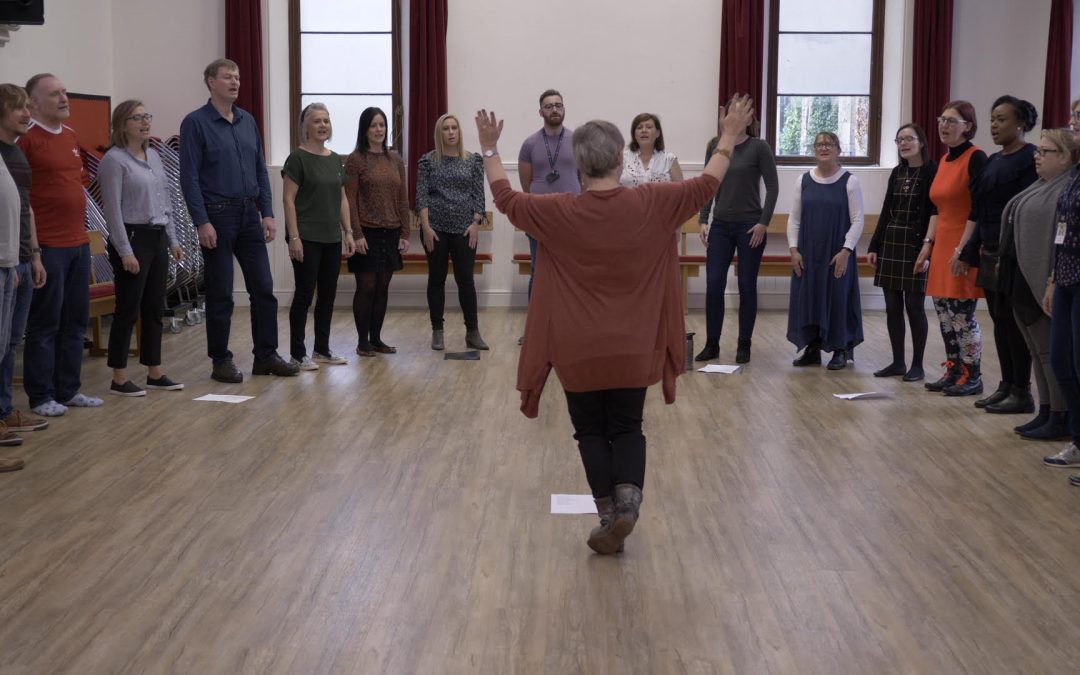 In March 2019, we organised an Employee Wellbeing event with John Lewis at their Kingston store. The morning event was open to businesses of all sizes and it was well received by a healthy sized audience, if we do say so ourselves! While we delivered a talk about how to get an employee wellbeing scheme up and running, it is fair to say that our headline speaker stole the show.

Martin Roberts from Lloyds Banking Group spoke openly about his struggles with mental health problems, his recovery, and the pivotal role his employer played in not only aiding that recovery, but for giving him a fulfilling role to help others in the company (and beyond) address any mental health issues they may be facing. It’s also fair to say that there was many a tear shed in the audience as he delivered his moving presentation.

Following his presentation, Martin had a conversation with Greg Staw, a founder of the on:song choir company and an event attendee. Martin was looking for an interesting initiative to roll out across five of the key strategic Lloyds Banking Group sites around the country, an initiative that aimed to bring colleagues together, develop the culture and sense of community and contribute to the wellbeing and positive mental health of Lloyds’ colleagues. After putting forward a proposal, one thing lead to another, and in July on:song rolled out Tune In, a project that saw weekly hour-long lunchtime choirs taking place simultaneously in Edinburgh, Halifax, Manchester, Bristol and London.

The sessions were designed to be as inclusive as possible, with engagement at the core of the project, and a strong emphasises on it being open to all, with absolutely no prior experience necessary. Indeed, over 70% of participants said they had never before sung as part of a choir! Sessions are delivered by expert on:song musical leaders local to each area, with Lloyds providing suitable rehearsal space, although in most instances as the groups grew they moved to nearby churches.

Uptake was higher than expected with over 300 individual signups, driven through the appointment of a Lloyds ambassador in each area. Weekly sessions are supported by on:song’s bespoke app, Audiate, allowing participants to access all individual part recordings, session notes and recordings, and a host of info to improve their singing.

Whilst the focus was very much on rehearsals (at which phones are strictly not allowed!) the app was widely recognised as having been instrumental in driving the progress of the groups and improving individual confidence. Through the app, and regular simple surveys, on:song was able to measure the effectiveness of the Tune In program, providing valuable insights for the bank and helping to strengthen the wellbeing and economic case for continuing of the project.

The choirs were regularly invited to perform at internal events, fundraisers, award ceremonies and even flash mobs in the head offices. This was a great opportunity to showcase the project and the fantastic progress made by the groups, but was also invaluable performance practice, as for the majority of participants this was the first time singing to an audience.

The culmination of the project saw each site host a Christmas concert for friends family and colleagues in local churches, and then all five choirs are scheduled to come together in February in London for a very special concert in which a ‘super choir’ of over 100 singers will be created, who will perform two songs together. The performance will be recorded and edited into a music video that will be used to raise money for Mental Health UK, Lloyds’ designated mental health charity.

We were surprised and overwhelmed by the response to this program: the numbers of colleagues turning up and the subsequent volume of positive feedback received and in some cases the instant recognition of the difference this had and was making to individual colleagues – to date this has exceeded all our expectations and continues to go from strength to strength.
Martin Roberts, Mental Health Lead, Lloyds Banking Group

We were delighted when we heard about the success of this initiative and our small part in bringing Greg and Martin together! We’ll be hosting a number of similar wellbeing events throughout 2020, many of which are free-to-attend. Keep an eye on our events page to find out more.