There’s little doubt that the conversation around mental health has entered in to the mainstream over the past couple of years. With more well known figures openly discussing their mental health struggles, more reporting around mental health and wellbeing in the media, and more businesses looking to support their employees’ health – both physical and mental – there’s been a positive shift in opinion and stigma – while it still exists – is becoming less apparent.

A further sign of this move into the mainstream comes from advertising. Over the past 18 months, a handful of brands have put mental health at the heart of their marketing campaigns in the UK.

The first such brand I noticed doing this was Lloyds Bank with its #GetTheInsideOut multimedia activity in early 2018.

Lloyds conducted research with Mental Health UK and found that 67% of people in Britain feel society is more comfortable talking about mental health conditions now compared to five years ago. However, 3 in 4 still believe there is a stigma attached to people with mental health conditions, and nearly a quarter are still uncomfortable talking about mental health with a friend or family member. So the campaign’s obbjective was to help normalise these conversations, as Lloyds believes “that ending the culture of silence will make it easier for us all to offer the right support to the people around us who need it.”

Ford – The Elephant in the Transit

In April 2018 Ford, together with Time to Change, launched an initiative encouraging men to open-up and talk about their problems.

According to Ford’s research, having a chat facing the same way as someone makes people more honest and open to discussing their feelings. Considering over a million journeys are made in Ford Transits daily, this led Ford to that idea that it can provide a space for countless men to talk about mental health each day.

The campaign tackled the delicate subject of mental health head on and included TV, social media and PR initiatives. For its 13,000+ employees in the UK, Ford also signed the Time to Change Employer Pledge. An act that shows its commitment to ensuring its employees will receive the support and training, so that no-one in its workplace has to face a mental health problem alone. 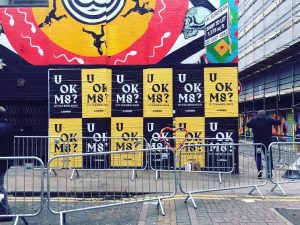 The aim was to reach an audience of millions with practical advice on how to cope and help friends with their mental health. LADbible Group also took the campaign offline by partnering with boohooMAN and Yorkshire Tea on UOKM8? products. The campaign included billboard posters and pavement stencilling to further emphasise the UOKM8? messages to young people.

And finally, less a dedicated campaign but more a reference to the current accepting climate around busy lives and the effect this has on our mental health, I saw this poster ad from the National Gallery.

While not directly referencing mental health, the copy encouraging people to use the gallery to ‘clear your mind’ and use of the ‘headspace’ will appeal to those searching for ways to achieve balance and wellbeing in their lives.

I hope to see other advertisers talk openly about such issues and reference mental health in advertising in the future. And if they do, we’ll highlight their work on these pages.