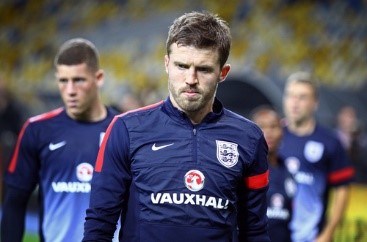 In a recent interview with the BBC, Manchester United midfielder Michael Carrick revealed that he felt depressed while on international duty for England.

“I’d been in the squad a long time and I’ll be honest, I was finding it hard going away with England….it was almost depressing in a way. I was depressed at times, yes. I told the FA: ‘Look, please don’t pick me.’”

Other than the mention of time away from home, further details about the causes of the depression were not disclosed. It’s possible that a lack of playing time for England, despite being an integral part of his club side’s success, as well as being away from his young children, were contributory factors.

Given Carrick eventually asked not to be selected, it’s likely that his feelings of being ‘really down’ were not picked up by his manager (which during the 2010 World Cup was Fabio Cappello), the coaches and support staff. It would perhaps be unfair to place any blame on Capello – or any other England manager Carrick played under – as their focus would have been to prepare the squad for upcoming matches.

Or would it? Should managers – regardless of industry and sector – be looking out for any peaks and dips with their charges’ mental health as they would do with their overall performance and efficiency?

Key signs to look for

In an ideal world, managers would know exactly what signs to look for. These include: low mood or sadness, social withdrawal, low self-esteem, difficulty making decisions, changes in eating or sleeping habits, and lack of interest in usual hobbies and activities.

However the reality is, many managers, particularly in SMEs (small and medium sized enterprises), aren’t even given basic managerial training, let alone an understanding of mental health.

I recall the first time I was entrusted with managing a team at a marketing agency some 12 years ago. I received no training whatsoever to equip me for this new-found seniority and back then, employees’ mental health was not openly discussed.

Five years on from that and at a different company, further managerial trust was placed upon me. This time, training was given but even as recently as 2011, mental health awareness wasn’t on the agenda.  What was covered however was the importance of managing with empathy.

But is empathy training even covered by most companies when they place managers on training courses – if such training is even part of a company’s culture?

While management development is requisite in larger corporations – where mental health management training is now increasing – often SMEs promote individuals to management positions without the necessary training or support to transition them into successfully managing people.

Sadly, business owners often don’t feel there is a need for it, or they cannot afford good quality training provision. The negative implications for overlooking such training are obvious – and an employee’s relationship with their manager continues to be one of the most prevalent reasons why they leave companies and roles.

Managing with empathy is a must

Managers should be able to empathise with their teams, to appreciate and listen to their concerns, to be approachable and to have an open-door policy. Common sense must also prevail. If a member of staff is frequently travelling, meaning leaving their home early and returning late, giving them the option of working from home the following day – allowing them to recharge and perhaps spend important time with families – will boost wellbeing and strengthen the bond between employee and employer.

They should also involve team members that perhaps aren’t feeling part of projects, or who are on the fringes of events or plans they’d want more involvement in. As I speculated earlier, this may have been the case with Michael Carrick. Not being part of the first XI, as well as being away from his young family, could have led to the decline in his mental health. Perhaps he didn’t find his bosses or managers approachable about his situation. Had he been able to speak up earlier, it may have prolonged his international career.

It would certainly be wrong to assume that mental health isn’t something that can be discussed in a macho sporting environment such as professional football. Accrington Stanley and their manager John Coleman decided to let striker Billy Kee take time off from football when he was suffering from depression and anxiety. He’s now back playing for the team and his 26 goals this season have helped them clinch promotion to League One.

Take a look at this great video which tells his story: https://www.bbc.co.uk/sport/football/42968278

Finally, even those who are managing with empathy and with great people skills may be unsure how to deal with a colleague’s mental health problems. The following resources – from respected bodies – may be useful for such purposes: